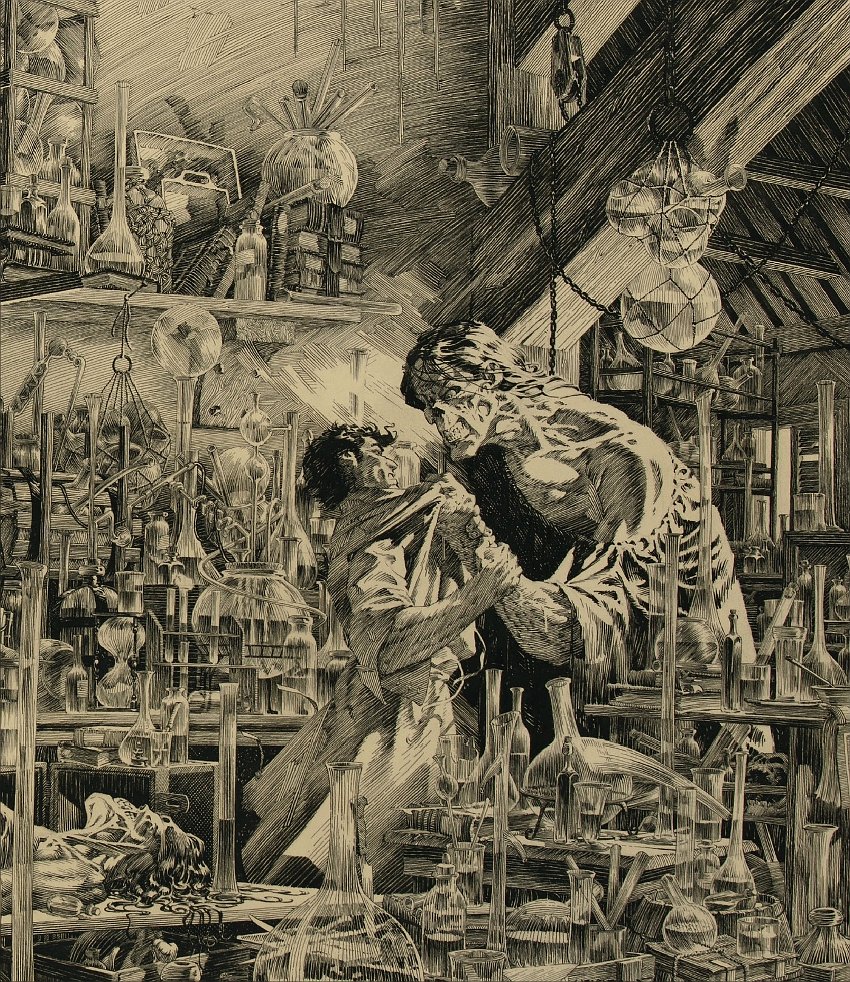 This week, themes of agency. Star Wars Galaxy’s Edge, the bots that welcome people into Wikipedia’s editing community, and of course, the mind-blowing artificial GM of AI Dungeon 2.

In our current economic model, how much agency are players/workers/citizens supposed to have? Titles like AI Dungeon 2 feel transgressive compared to the perfectly crafted rollercoaster of a Call Of Duty game. Where do you put DLC when the player is creating their own experience?

Iceland’s prime minister said, “having sex with your wife doesn’t count in GDP, but with a prostitute it does.” Writing your own adventure doesn’t count either.

We suck at measuring creativity that doesn’t contribute to Gross Domestic Product. What would happen if we didn’t?

In AI Dungeon 2 we do away with pregenerated actions and allow the user to enter any action. The model then continues generating the story resulting from that action. We also upgrade the size of our model to OpenAI’s largest 1.5B parameter model and fine-tune it on a collection of text adventures obtained from chooseyourstory.com.

The results don’t always make sense, but when have you ever seen this kind of interaction in a video game? I’m so excited to see what happens when we create experiences with more verbs than “shoot.” This game is verbs all the way down.

For example, Alex Blechmen told the AI characters they didn’t exist, and things got weird.

Todd Martens writes a fascinating overview of Star Wars Galaxy’s Edge. He spotlights Imagineers’ big question: how much agency do you give players who might not all want the same level of interactivity? Reminds me of escape room design: mix ingenious puzzles that require analysis and dissection with problems that can be solved purely through brute force. Everyone gets something to do, not just the puzzle-fiends.

Disney public relations officials cringe any time the phrase “role-playing” is brought up, but Trowbridge has said the vision for the land is to allow guests to opt-in to game-like experiences that fall somewhere between simplistic choose-your-own-adventure activities and live-action role-playing, or LARPing, as it’s known.

“Not everybody wants to be a hardcore LARP-er,” Trowbridge says, adding that Disney has spent much of the last decade experimenting with how the parks can safely — and unobtrusively — allow guests to take on more active roles. One solution for Galaxy’s Edge is to embed many of the more overt game activities in the Play Disney Parks mobile app, which will house a multitude of exploratory quests, including a land-wide game for control of Galaxy’s Edge.

Researchers at the Stevens Institute of Technology did a “census” (a census!) of all of Wikipedia’s bots, divvying them up into types that sound right out of an RPG:

[There are] “fixers,” which repair broken content or erase vandalism; “connectors,” which link pages and resources together; “protectors,” which police bad behavior; and “advisors,” which suggest new activities and provide helpful tips.

Look at this beautiful taxonomy diagram (from the team’s summary): 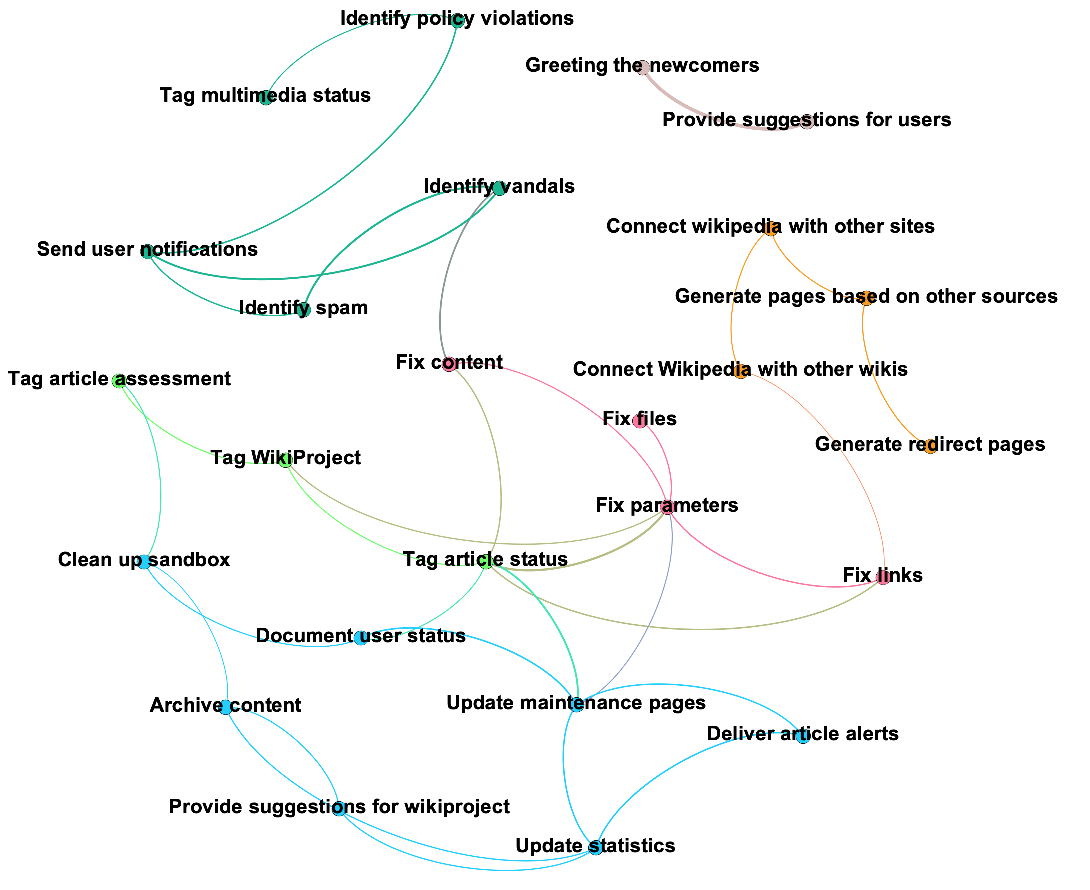 The first bot was born in October 2002 to add and maintain U.S. county and city articles. They now play a huge role, with 1200 Fixers responsible for 10% of all edit volume. But check this out:

New members of online communities are more likely to stick around if they’re welcomed by fellow members – but Nickerson and his team found that new Wikipedia users who interacted with advisor- and protector-bots were significantly more likely to become long-term contributors than those greeted by humans. That remained true even when the bots were contacting users to point out errors or delete their contributions, as long as the bots were cordial and clear about their reasons.

I love this example because it shows a cold machine used in a way that perfectly fits its limited function. Human society is full of repetitive social rituals. A well-governed community choosing to automate some of its practices seems like a great model to learn from. Let’s keep our most precious rituals, perform them with care and love. Other processes should have humans in the loop because they already have embedded prejudice or bias. But it does feel like there’s a role for small, targeted interventions.

Indie AI, if you will.

How about a weekend thought experiment?

Researchers at the Max Planck Institute for Human Development in Berlin found that human-bot cooperation in a prisoner’s dilemma was stronger if the bot pretended to be human.

…bots impersonating humans were more successful in convincing their gaming partners to cooperate. As soon as they divulged their true identity, however, cooperation rates decreased. Translating this to a more realistic scenario could mean that help desks run by bots, for example, may be able to provide assistance more rapidly and efficiently if they are allowed to masquerade as humans. The researchers say that society will have to negotiate the distinctions between the cases of human-machine interaction that require transparency and those where efficiency is key.

When might it be right for a bot to lie about their identity in the pursuit of a greater good?

…and some trippy AI sci-fi

“How Alike Are We,” a beautiful story by Korean author Bo-Young Kim in Clarkesworld, a trippy, twisting yarn about how intelligence fits the body, what thoughts are possible, undesirable, inevitable, in the messy human flesh. It channels the best of Ann Leckie “Ancillary Justice” and Kim Stanley Robinson’s “Aurora.” And it’s fresh as hell.

Of the world’s top hundred websites, Wikipedia is the sole noncommercial site. If the contemporary internet is a city, Wikipedia is the lone public park; all the rest of our public spaces are shopping malls—open to the general public, but subject to the rules and logic of commerce.

I dream of a parallel world where Twitter is a public benefit entity like PBS. I even explored the idea little.

Let’s keep zooming out. Klaus Schwab, founder of the World Economic Forum, writes the “Davos Manifesto 2020”, seeking to define “The Universal Purpose of a Company in the Fourth Industrial Revolution,” incorporating customers, employees, suppliers, society, shareholders, and “our global future.” Easy to be skeptical of these kinds of Davos pronouncements. But this is good stuff:

iv. A company serves society at large through its activities, supports the communities in which it works, and pays its fair share of taxes. It ensures the safe, ethical and efficient use of data. It acts as a steward of the environmental and material universe for future generations. It consciously protects our biosphere and champions a circular, shared and regenerative economy. It continuously expands the frontiers of knowledge, innovation and technology to improve people’s well-being.

B. A company is more than an economic unit generating wealth. It fulfils human and societal aspirations as part of the broader social system. Performance must be measured not only on the return to shareholders, but also on how it achieves its environmental, social and good governance objectives. Executive remuneration should reflect stakeholder responsibility.

Ties in well with the efforts of some countries to begin to measure more than just GDP.

[Iceland’s PM,] Ms. Jakobsdottir said an Icelandic poet had joked that “having sex with your wife doesn’t count in GDP, but with a prostitute it does”.

I’m an optimist. These experiments with player agency help me imagine a world where we don’t talk about “consumers” anymore. “Consumer.” That word is a disempowering, drooling thing. It casts us as unsatisfiable digestive passages chewing through an endless supply of bulging shopping carts. I want us to be players. I want it to be the norm for companies to care as much about money as they do about stewardship of their community of employees, customers, and suppliers. I want governments to base the rules of corporate play on measures of human thriving, not “gross domestic product”.

I realize there’s a terrible irony here. The first experiment I quoted lives inside a megacorporation’s AI infrastructure. The second’s in the bowels of a different megacorporation’s empire of entertainment. But you gotta look for the bright spots wherever they are! They give you a taste of the kind of thing that better incentives could spark a whole lot more.

Did you know there is a GDC event where game devs share “homemade tools, solutions, or hacks that could benefit or inspire you”? The archive goes back to 2015! Submissions for 2020 are open now ‘till Jan 7.

An interview with Dr. Emily Silverman, host and creator of “The Nocturnists,” a podcast that uses Moth-style storytelling to humanize medicine

I’m late to the party on this one (it’s been going since 2016), but there’s a search engine for fake news that helps you visualize its spread in a bunch of different ways. Heard of it via this strongly worded reply to a fake news tweet.

Pound of Flesh, a new supplement for Mothership. I’ll be honest, Mothership is too crunchy for me. There. I said it. But I can’t resist buying every single new issue because of the design and generator tables. I freakin’ love these. Video review here.

Mark Marino’s Flight of the Code Monkeys is an extraordinary game that is entirely in, and also, a Google Colab notebook, via Em Short. (Yep, this week there are TWO games hosted in a tool designed for data scientists. Bah.)

And While You Be, Be True, a short two-player ttrpg by Justin Joyce where you play two people whose relationship exploded, meeting again for the first time. Right as you come together, time freezes everyone—except the two of you. I love this concept. (Via this great thread hosted by Party Of One’s Jeff Stormer, ft. lots of other great games)

I thought that time passes far more slowly in the desert. It took me a concerning while to realise it just doesn’t pass at all, the Sun fixed in the sky. Which is kind of disappointing, as I wanted to see the stars over this setting. Which is also to say, I was now so into Rock Simulator that I was feeling disappointment at the lack of features.

Alrighty. Till next week y’all wonderful humans. Would love any feedback on this thing (tweet @raphdamico or email me), or ideas for the next one!