Looking again at my blog post on Escalation, I realized I’d missed an important pattern, which I’m going to call Reflection & Clarification. It solves one of the important pitfalls with pure escalation: that players may generate contradictory and extreme content that pulls the story apart. The Reflection & Clarification pattern is the inclusion of explicit structures in the game that give players time to synthesize different directions they’ve created into one coherent whole.

There is a great concept in chaos theory called “criticality”, that I was introduced to via Jason Morningstar and J Li’s “Pattern language for larp design”

In chaos theory, the criticality of a system describes the system’s overall sensitivity to being completely disrupted by a given input. For example, a pile of cards on a table is subcritical, or very unlikely to be changed in any meaningful way by just shifting a card around. A house of cards, by contrast, is supercritical, or extremely likely to be categorical transformed by shifting a card around (because it’s likely to collapse). When a supercritical system transform, it often collapses to being subcritical (in this case, the house of cards turns into a pile).

A system that is critical, however, is one in which many actions are likely to have a substantive impact without destroying the larger system as a whole. In a game, this looks like a situation in which characters can have a meaningful impact without breaking the game.

A satisfying climax will often often the process of bubbling a critical situation into a supercritical explosion, in order to reach a new stable state.

Unchecked escalation risks making the story supercritical. It’s obvious when this is happening: the reality and rules of the story begin to splinter; players stop being able to build on each other’s ideas (or are not sure which ideas to continue with); the energy gets sucked out as players start feeling like their decisions don’t matter.

Group storytelling is fundamentally an information efficiency problem. Part of why “yes and…” is so important in improv is that it’s simply a ton of cognitive load to generate new ideas, but it’s a lot easier to take half an idea and build on it until it’s whole. When you negate another player’s reality, you are literally kicking the foundations out from under yourself.

One way to overcome this is to ensure that there is enough space in the game for disparate ideas to become one. Two weak ideas that are not shared can collapse under the load of the story. But if you give players time to share their inner thoughts and knit them together, they can continue on with a fewer, stronger, collaboratively owned ideas.

Another positive side effect is that Reflection & Clarification usually leads to the world becoming more concrete and specific, which also amplifies the story. The concept of a spider is not that scary. A car sized lump unfolding into a humongous spined tarantula, your pale terrified face reflected in its eight giant eyes as its chittering drowns out your pounding heartbeat—that’s something a story can build on.

This connects to a bigger idea which is that all creative processes are carefully sequenced moments of diverging and converging.

You diverge to generate tons of content, ideas, concepts that don’t have to make any sense together. But if you only diverge, your story doesn’t go anywhere and collapses under the weight of randomness like a supercritical house of cards.

You converge to edit, simplify, and synthesize them into fewer, stronger ideas. But if you only converge, the story never lifts off and play feels constrained, narrow.

But balance the two and each reinforces the other, keeping the story fresh and coherent.

(Side point, one of the most awesomely nerdy attempts to catalogue this in the design world is Hugh Dubberly’s “How Do You Design”, a maniacal compendium of dozens of attempts to model the design process).

With all this in mind, I added these examples to the “Escalation” post:

The Campfire: a welcome respite 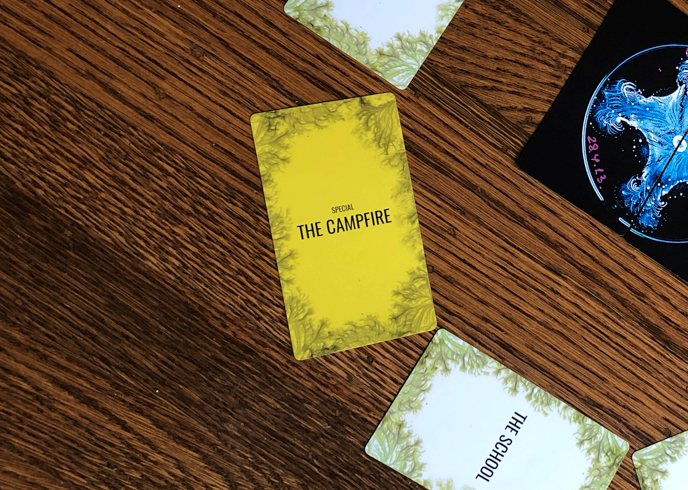 In this midpoint moment, players can take a breather (no one can be hurt in this scene) and share theories about the true nature of the Zone.

The campfire comes after the first handful of locations. Players have generated a bounty of ideas, but may have pulled the world in contradictory directions in figuring out the role of Director. Before I introduced this reflection, tables didn’t have a way to come to a shared theory of the zone. Going into the second half of the journey, players were too worried about stepping on each others’ toes to properly intensify the drama.

Now, the Campfire is a welcome respite from the tension, and I love how it helps focus the second half of the story—when everything goes so terribly wrong.

There are many other ways to Reflect & Clarify. What are some of your favorites?