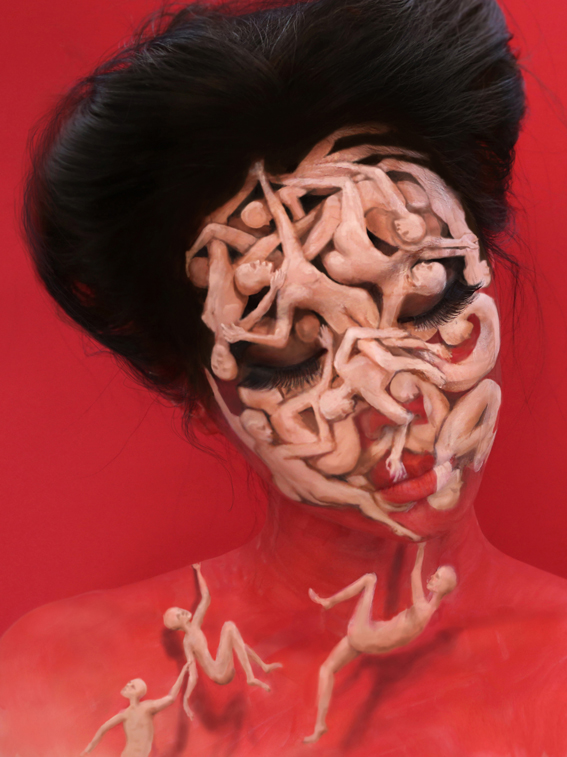 This week: the battle between bottom-up and top-down, between illusory individual control and systemic misalignments. When you observe everything, when you try to control, you snuff out the rich, messy process by which community knits itself into a “home where people notice when you’re not there”. On the other hand, you can start small, thinking about the subtle mechanics that make people feel comfortable and let that organically grow into community.

“The role of the designer is that of a very good, thoughtful host anticipating the needs of his guests.” —Charles Eames

So I want to start with Avery Alder’s thread about the Mist-Robed Gate by Shreyas Sampat where she talks about how the game influenced her own designs with its rich attention to the cozy game outside the game:

The text teaches you how to be an audience for this particular game, and how to play to your audience when your character is in the spotlight. It lets you know what the room should feel like (cozy, energetic, collaborative, enthralled). It talks about setting a mood.

It includes instructions for preparing tea, suggestions for snacks, and recipes for the meals that you can feed people before play. It talks about the importance of food not only in nourishing your players and building trust, but also in establishing a mood in the room.

One layer up Johann Hari’s interview with Tristan Harris & Aza Raskin rocked me, particularly this line he quotes by Bosnian writer Aleksandar Hemon “Home is where people notice when you’re not there”. Hari charts countless examples of how an individualized model of treatment for things like addiction and depression misses the underlying pain caused simply by our fragmented society.

If you have a separated a bee from its hive, it goes crazy. It doesn’t make sense on its own right. In fact, a human being separated from the tribe in the circumstances where we evolved, was depressed and anxious for a really good reason, you were in terrible danger. These are the impulses we still have. This is in a very deep sense who we are. But we are the first humans ever to disband our tribes, to tell ourselves a story, actually you should go it alone, actually you don’t need other people. You see how deep this is in the culture when you realize that even our kind of cheerful self-help dictums are wrong

“I do miss something from the war. But I also believe that the world we are living in—and the peace that we have—is very fucked up if somebody is missing war. And many people do.” –Nidzara Ahmetasevic, survivor of the siege of Sarajevo

And did you know the UK has a minister for loneliness?

It is supporting “friendly benches,” which are public benches where people are encouraged to go and chat with one another. It’s pushing to keep community spaces open and to stop public transportation from being cut in ways that leave people isolated. The government is also putting social workers in doctor’s offices for “social prescribing” — connecting lonely patients with local organizations.

One early lesson, Barran said: Because of stigma, don’t post a sign inviting lonely people to show up. Rather, have an upbeat sign inviting people to take part in a dog-walking club, a community garden or some other activity.

Now to twist the knife. Jathan Sadowski coins the term “The Captured City” to describe the increasingly dense network of corporate and police surveillance (and self-surveillance) that seeks to optimize and control the population. Consider the stark opposition between the warm, bottom-up community building highlighted on a small scale in Avery’s thread, Johann Hari’s interview, Sebastian Junger’s “Tribe”, and this top-down nightmare:

“surveillance extends far beyond the obviously ‘criminal’ to include data as exotic as feeds from radiation detectors — sensitive enough to pick up recent chemotherapy treatment in passing bodies — and sophisticated enough to rapidly recall up to five years’ worth of stored ‘metadata’ and temporally unbounded (and undefined) ‘environmental data’ in its continuously mined databases.”

The captured city, as this suite of surveillance and analytics suggests, is captured in two interrelated senses: as data and territory. The web of surveillance systems built and operated by the military-industrial complex accomplish the data capture, which enables the police to better capture the city’s territory, maintaining a data dragnet across the city and keeping tabs on targeted groups. The goal is to enmesh the city so tightly in these systems, to make them such a critical part of the urban infrastructure, that the two can never be disentangled.

And how this might feel on the ground? A different context, but M.D. Emily Silverman’s experience using Epic is a perfect illustration of inhumane it might get. Spoiler alert, this is also a UX story (as are all of these).

But few have written about the product’s voice. Spot an incorrect diagnosis on a patient’s list of medical problems? Good luck deleting it. Much easier to “resolve” it — a word choice that suggests an expectation of unmitigated success, as if Epic were your helicopter parent.

Checking in on a beloved patient who was hospitalized? Enter his chart and an accusatory pop-up may appear: “Deceased Patient Warning: You are entering the medical record of a deceased patient. Are you sure you want to proceed?” This can be a jarring way to hear the news. But Epic offers no condolences, no empathy, no acknowledgment that doctors, too, have beating hearts.

Who is Epic? I try to imagine. Perhaps a clean-shaven man who wears square-toed shoes and ill-fitting business suits. He follows the stock market. He uses a PC. He watches crime dramas. He never bends the rules. He lives in a condominium and serves on the board of directors. He rolls his shirts into tubes and arranges them by color in his drawers.

And of course, this exists within a larger system of regulation which the software is simply enacting.

It’s all about looking at the nested stack of problems. Work small, but also if you can, look one level up too.

Jeeyon Shim threads about her sister Jeemin’s very insightful design talk about their stunning collaboration. I talked about this last week in my playthrough of Twain, but, particularly in solo roleplaying games, there is an incredible opportunity to use every tactile & sensory detail of the physical experience to undergird the emotional experience. (Or just watch it to see a centaur whose body is also a beer cooler. A BEER COOLER.) A quote from the thread about her game of sirens “First Lesson”:

I chose fabric as the material for this LARP guide because it can be carried into the water with the player. I chose a soft material, because there’s a fragility in the writing that made fabric feel more appropriate than other materials such as wood. I chose this size because it felt appropriate in proportion to a human body: small enough to handle without difficulty, but large enough to feel against your skin in a substantial way.

Patrick Klepek interviews writer Kate Dollarhyde about how she (and previous designer Chris L’Etoile) imbued Outer World’s Parvati with a nuanced ace identity. I took away two things from the article. One: specificity. A real person just unremarkably existing does so in the context of real life choices created by the subtleties of their identity interacting with those around them, not grand philosophical discussions or ham-fisted, sweeping generalizations (looking at you Hideo Kojima). Go small, represent the details, get folks to do it who have that lived experience (Dollarhyde & L’Etoile’s both identify as ace). Two: it’s not just the writing—mechanics and player choices must support this representation:

“I want that conversation to feel like a safe space for the players who are playing it and identify with it,” she said. “I don’t want to pull the rug out from under them and say, ‘Haha, actually you’re a joke,’ or ‘other people think you are a joke.’ […] I don’t want to write a homophobia simulator. [laughs] That’s not what I got in the game writing for.”

Emmanuel Carrère seeks out the real Dice Man (via Rock Paper Shotgun) in this fascinating story of the fictional Luke Rhinehart, a man who lives his life by dice rolls, and the real (or his he?) Luke Rhinehart, author of the book, and the weird movement that popped up around it. As a game designer, the thing I most take away from this is the idea of intentionally designing the moves in your life as ritually as those on a PbtA character’s sheet. Buried in the story is another beautiful throughline; in life, when do you decide to give up one game and move to the next one?

He has three rules. The first is to always obey. But obeying the dice is ultimately obeying yourself, since you set your options. Hence the second rule, concerning the decisive moment when you list the six possibilities. You have to examine yourself and try to find out what you want. It is a spiritual exercise, aimed both at getting to know yourself and getting a better grasp of the infinite possibilities that reality offers. The options you select have to be pleasant, but at least one – the third – has to be something you would not normally do. It has to make you overcome resistance and break with habit. When you throw the dice, your desire has to be tinged with fear.

Mist-Robed Gate, by Shreyas Sampat. As I mentioned above—I just had to read it after reading Avery’s thread. Beautiful and thoughtful.

Jen Adcock and Todd Craper are Kickstarting “The World’s Greatest Roleplaying Game: The Zine!” which made me both chuckle and think with what looks to be a bunch of ways to hack 5e with indie game mechanics. This is a clever way to use game mechanics to directly critique and poke the behemoth. Backed!

Avery Alder is running her four day intensive workshop “Designing Games That Matter” on how to design transformative tabletop roleplaying games. I deeply admire her work, writing and advocacy. Looks amazing. (15-19 May 2020 in Tatamagouche, Canada)

Oh—side note—one of the things I admire about Avery is how transparent she is about her work. The past workshops page on her site is loaded with reports and the resource lists, which helped me a ton when starting to dive into my own game design last year (I mean, just look at this, and this!) Thank you for sharing this goldmine for designers new and old 🙏

Chuck Yeager tells the story of his plane disintegrating around him at Mach 3.18

Seven systemic reasons for the falling birth-rate in the UX, once again showing that you have to solve the problem one level up from the problem

@braak: “just thinking about how Baz Luhrman solved the “how do we put guns in modern adaptations of Romeo and Juliet when they’re always talking about swords?” problem by just showing a close up of a gun that had “sword” written on it. Legend”

Huge kudos to the Sonic The Hedgehog team for fixing the movie, and hope they document how they pulled it off. And was it pure Machiavellian (Robtonikian?) gonzo marketing? WAS IT?

The worst image ever made. Cyberchondria. “It makes me want to fuck the moon”. Chuckle-worthy UX affordances. “Sometimes good design is the act of not putting a hat on someone”. The most stunning visuals in cinema. Mechs! So many mechs!

Sometimes it’s worth going on a sunrise walk: might just run into the planet Mercury.

GIFAANISQATSI! ‘till next week folks!