The Zone crept into early access on April 17, 2021 with many many typos, a bunch of missing features, and not yet glowing with Caitlin Russel’s incredible art. A ton of feedback and bug-squashing and on July 21 I pulled it back out of the oven as a nicely baked 1.0.

Since that early access launch y’all have created an incredible 1,923 games, and 297 expeditions made it to The Center! That’s almost a thousand players who made it to the end (although I know many folks played multiple times so it’s likely a little lower than that.)

† Wait, how did a “zero” player expedition complete? I’m pretty sure those are folks who got through the whole game, then for whatever reason deleted their players

†† 6 players? Yep! I playtested the game with 6 but decided to limit it to 5 just before launch. It keeps things tighter.

And what wishes you’ve made! 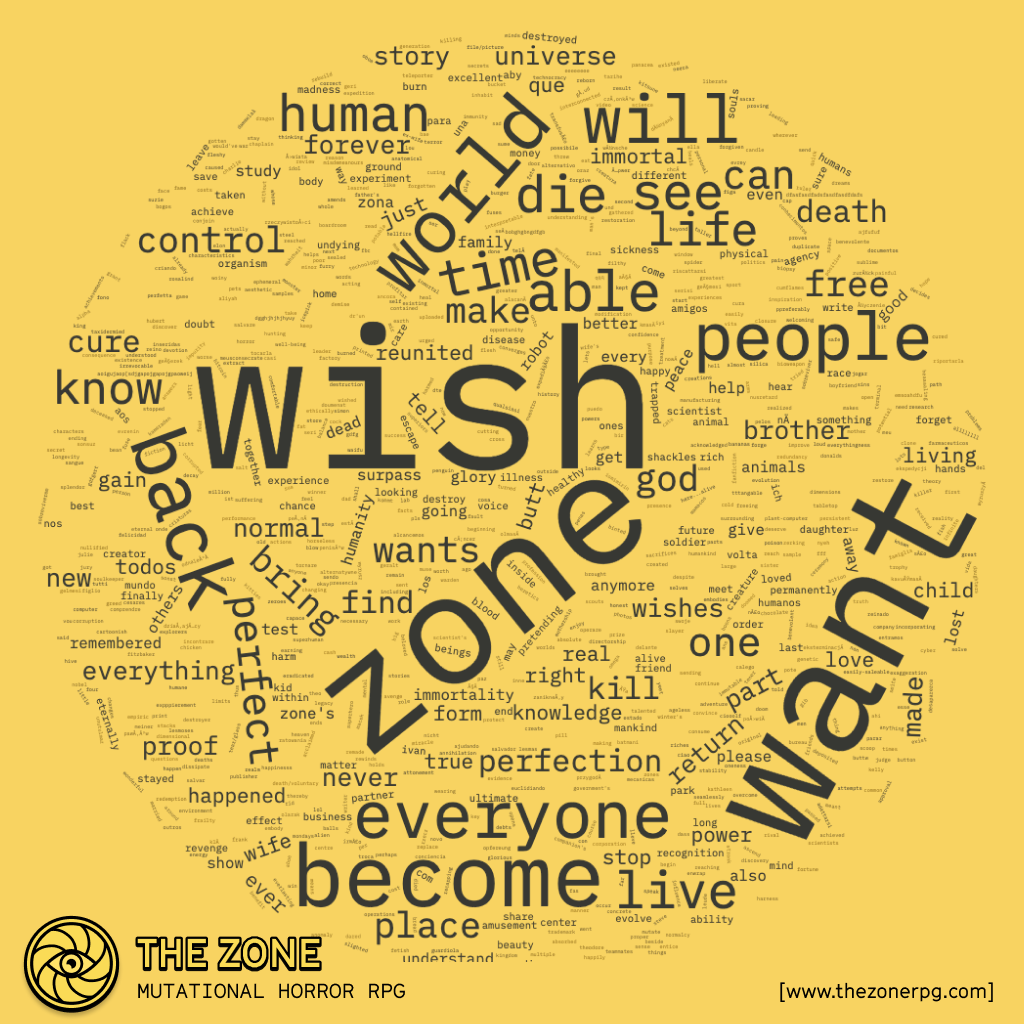 One of the neatest things about being a digital rpg is that I get to see the incredible range of wishes people make at the Center of The Zone. It reflects that each table has its own tone, from very serious character investigations to wild horror slapstick. Vibe emerge organically, like hands on an Ouija spelling something nobody expected. I was hoping for hilarious Zones! Beautiful Zones! And when appropriate, Zones that chill you to your core.

And one of my favorites: “Can I get a large bucket of chicken?” 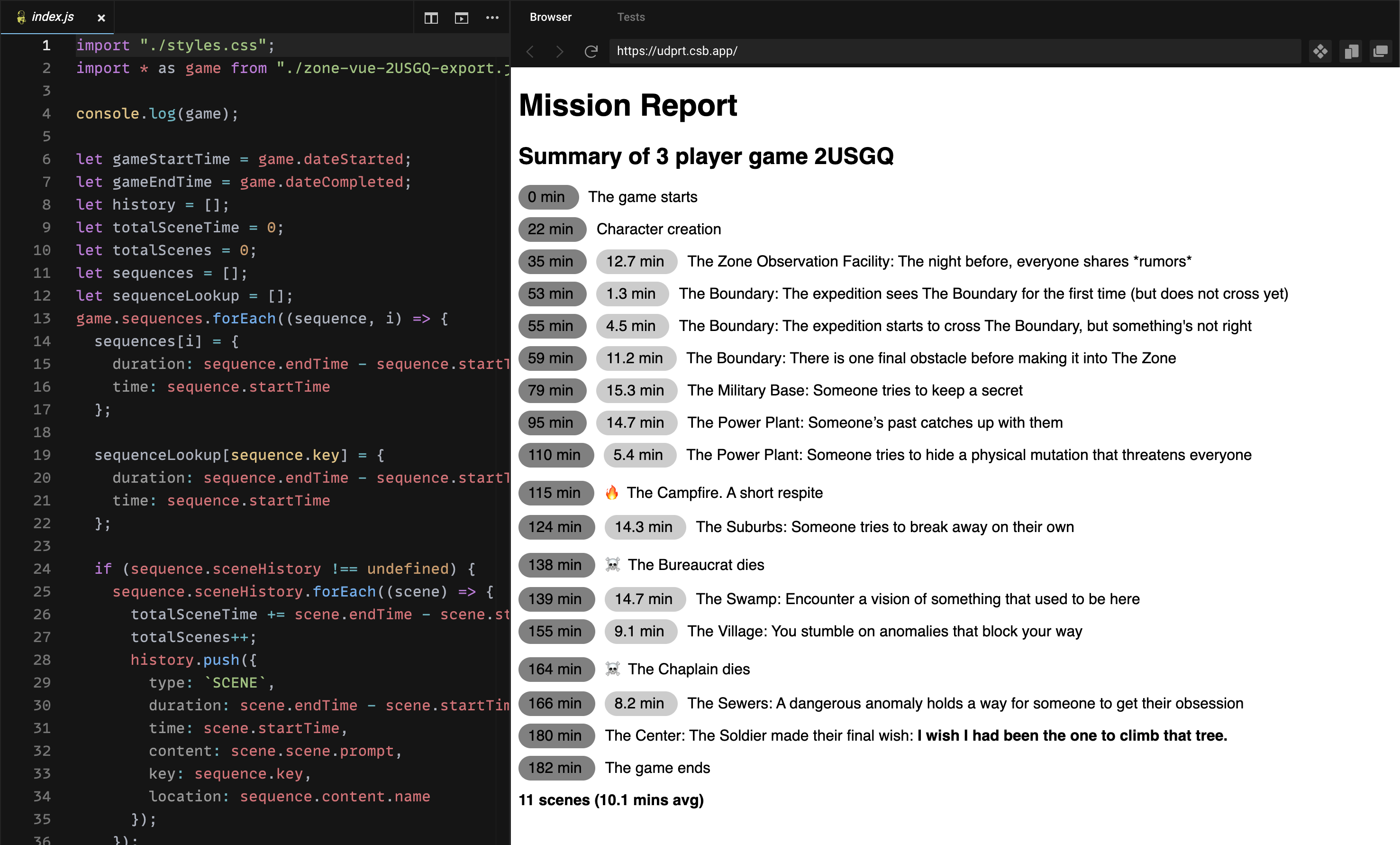 I’ve been working on a better mission report. It’s still just a prototype, but I love the idea of giving players a detailed recap of the story, which could also help facilitators see the game’s timing in detail so they can learn to fit games into specific amounts of time (for example a convention slot, actual play—or just before kids’ dinnertime!)

Digital rpgs are still such a new frontier, and there’s much to discover about the kinds of questions you can ask of the data. What would you like to know about games of The Zone?

The Zone in Print! 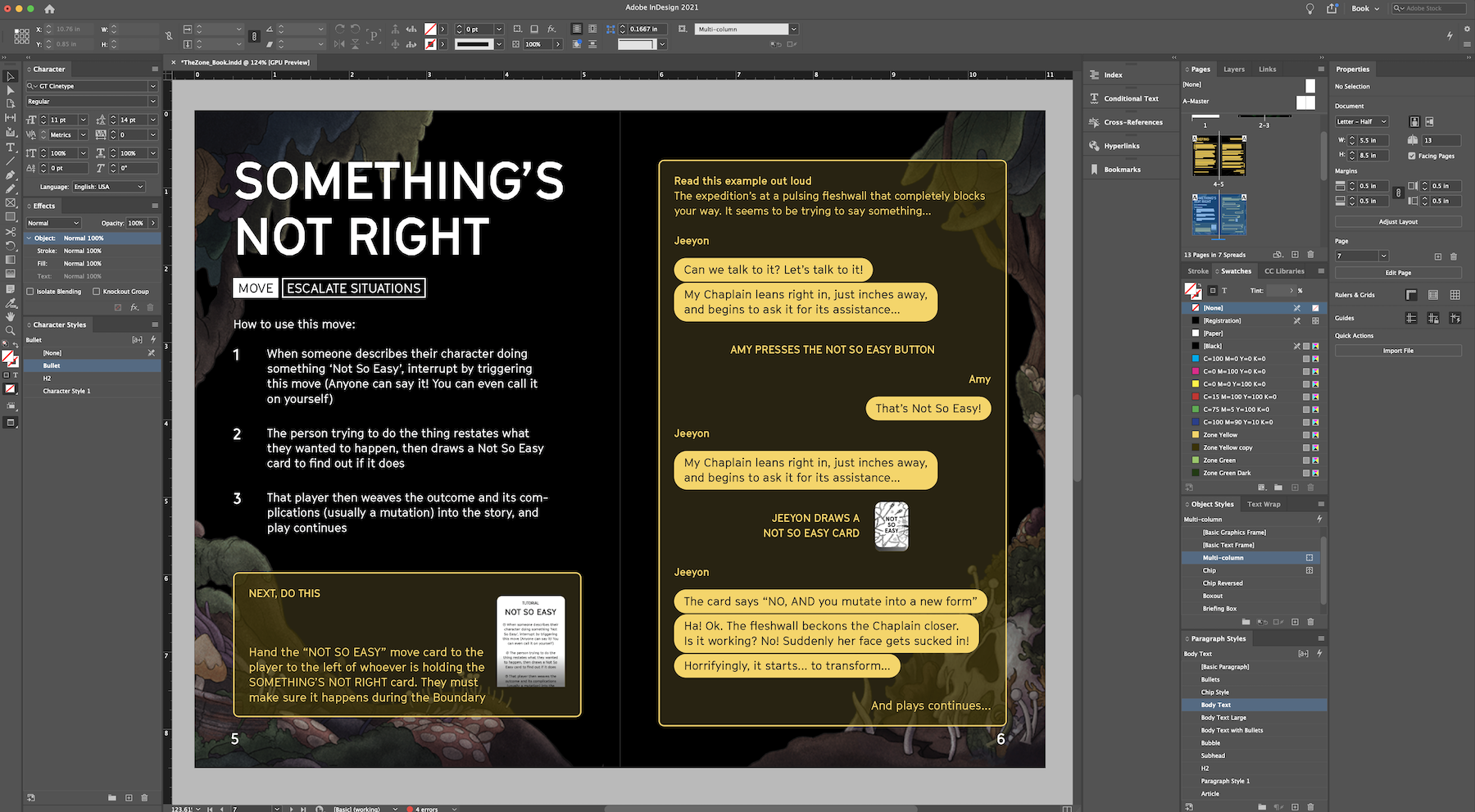 The big news for those of you gathering in-person is that I’m now actively working on the layout for the print version! Not too much to announce yet, but I’m hoping to bring you a beautiful booklet and cards in a box, with the same focus on ease of use as the digital version.

The goal is zero-prep. You should be able to unbox the game, open the booklet at the table, and start playing immediately by reading out loud together. I’ll also have an entire chapter with all the hard-earned behind the scene tips on how to facilitate, for those who want to dive deeper.

What should The Zone’s tagline be?

I’m also thinking about how to tighten up the messaging by coming up with a pithy tagline. Sitting in a grid of Kickstarter thumbnails it needs to be obvious that The Zone is an rpg—sounds obvious but easy to miss in the crowd—and what kind of experience it is.

If you’ve played the game: how would you describe it in a couple of words?

(feel free to weigh in via email me or reply to this tweet!)

Was looking at Mothership’s incredibly pithy tagline « sci fi horror rpg » and thinking The Zone would really benefit from something like that!

What do you think best describes the game?

Modding is now even easier (and more colorful)

There have been a ton of quality of life improvements to the Zone’s modding, including a rich set of preset themes and a guide to the principles of “What makes a Zone?”.

How different can two Zones look?

I know a few of you have some neat mods in the works, and so do I ;) I’ll dedicate a whole letter to this soon, but in the meantime I encourage you to check out the improved quickstart for modding.

Thank you—and be kind to yourselves

It’s been a long road since March 2020 changed everything about my plans for The Zone (and so much else 😢), but I’m incredibly proud of this game and so grateful to everyone who has checked it out, wrote about it, and played it.

It hasn’t been easy to keep the momentum going in the darker moments of 2021. Sometimes I went weeks without touching the game, especially when some medical procedures left me out-of-commission for some stretches. Sometimes I wish I could be one of those folks who consistently keep the flywheel going, making steady progress each week, but then I remember that self-compassion is everything. I have to know myself, and support my embodied brain in whatever neuro-idiosyncrasies it meets the world with. As someone with chronic health issues in a pandemic (like many of you), it’s been an exercise in self-acceptance. If life is a game of inches, then joy is also something you find in the cracks.

And one of the biggest sources has been hearing about your journeys! I want to give a special thanks to the 106 of you who filled out the feedback form, and to everyone’s who’s gotten involved in the Discord or on Twitter. All year I’ve been able to make the game better because of you, and every time I hear that someone’s had fun with The Zone it lights a fire under me 🔥😍.

I’ve asked myself if it makes sense to put the massive stress of a crowdfunding campaign on myself with everything still so in flux, but I know that it’ll be worth it because nothing gives me meaning like knowing a group of humans somewhere on this 🌍 is having evening of weird surreal mutational storytelling joy.

Once again, thank you! And if you have things you’d like to see in 2022, I want to hear about them. What would you like to see come to a Zone near you?