The Federal Bureau of Coherence needs your h̴e̵l̷p̸

In the midst of all this devastation, I have an exciting announcement. It’s taking me a while to figure out a plan, but TL;DR: I will be bringing The Zone to a digital release more appropriate for these pandemic times. Physical release will still happen, but when it feels right.

And I’ll be need you to help me playtest! Ping me on Twitter or email if you’d like to be one of the first to try it.

Aaaaah, February. I had just torn open the latest playpacks of the mostly complete game and was ready to figure out who to send them to. Some incredible art was coming through (more on that later!) An April or May Kickstarter sounded just right. I’d even finally had a chance to play my own Golden Cobra game, whose key mechanic is gentle physical touch (though with social distancing on the horizon, we’d already switched that to a distanced gesture). 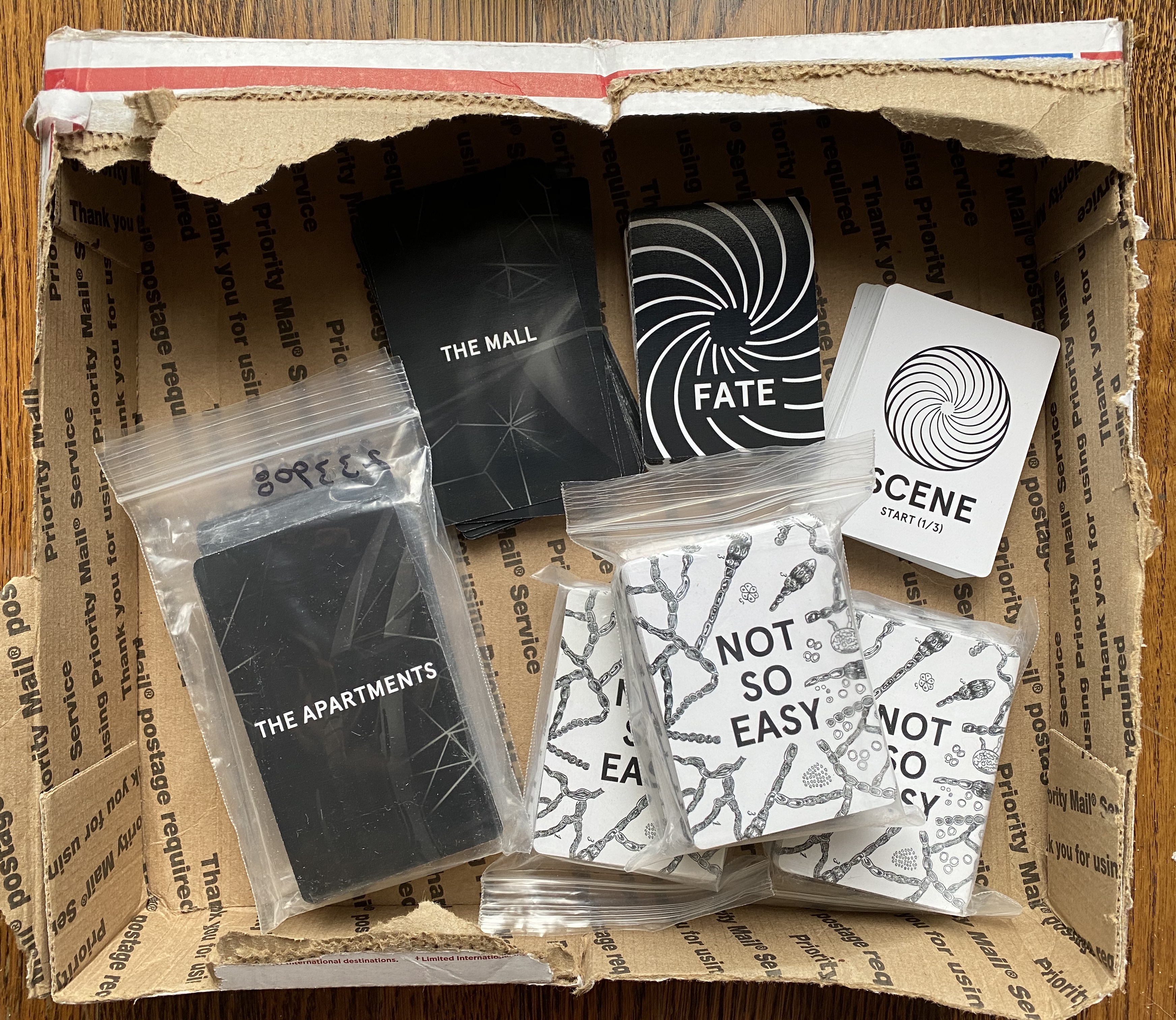 And then it all happened. You know—the thing.

Ugh. It was no longer right to gather friends in an enclosed space to play the release candidate. I stopped planning playtests. I tried to keep working on the layout—and got pretty far telling myself I’d just get it finished so it was “ready to go” when the time came—but instructions aren’t just a thing you write. They are the crystallization of the conversation that gets a game going, and without playtests I had no feedback loop to that conversation. Making progress felt like pushing on a string.

Making art is important—especially in a moment like this—but it just doesn’t feel that way when you’re in this moment. Things that gave you comfort suddenly feel exhausting. Having made something affirms that you still have a little bit of control, it helps you carve a bit of an eye into the storm, but actually doing the making becomes gut wrenchingly hard.

Many of you reading this are makers too, how have you dealt with this?

So I started messing around with Roll20 and Tabletopia (which I’d already experimented by running a great playtest with the wonderful Amber Autumn & friends). 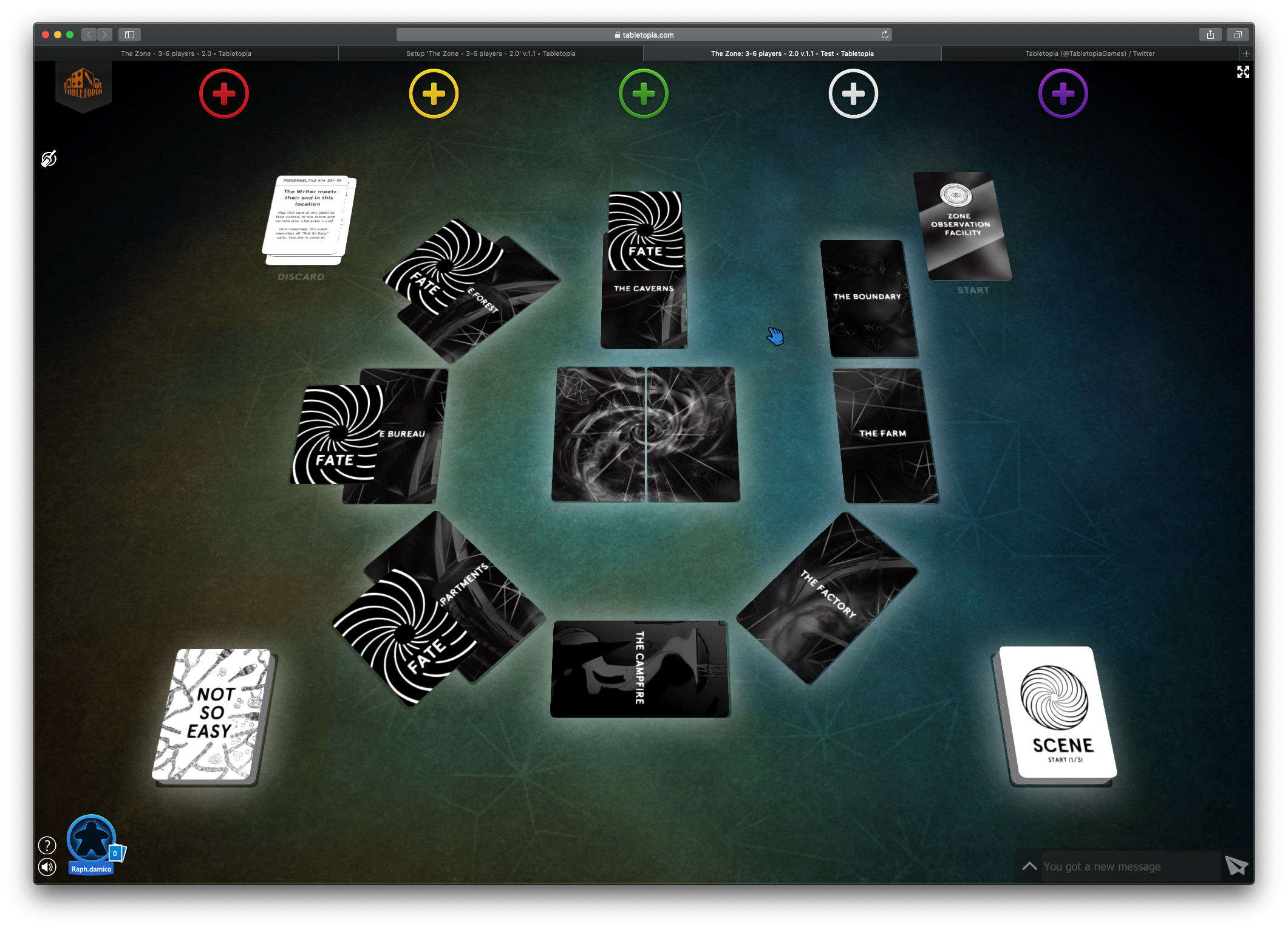 But I felt a few things were missing in just literally translating the table to a virtual space.

A huge part of The Zone is the atmosphere. It must be played in the dark. With glowsticks. I wanted that.

And I wanted it to be accessible. Roll20 is incredibly powerful and also incredibly fiddly—I’m not sure I need all that power for a GM-less game. And shrinking down all the cards to screen size doesn’t make the best use of that form factor.

Finally, I want to guide my players. I want it to be the easiest couple of hours of spooky storytelling since, well… 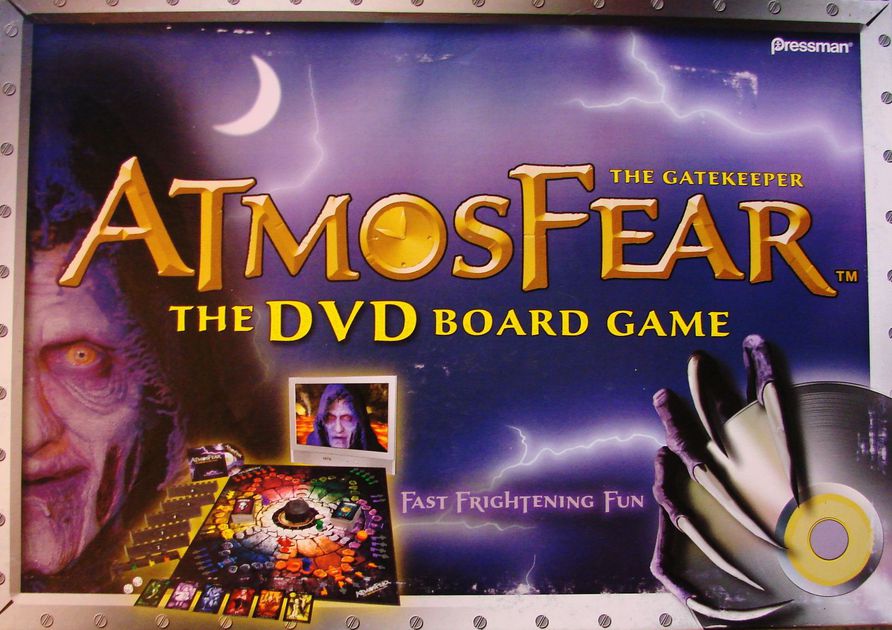 (Disclaimer—The Zone will not include a VHS player.)

So, it’s time to get making. I’ve been having a lot of fun this week prototyping.

The first thing I set up was placing all the game elements, using Figma as a level editor. This was easy using the Figma API, and saved me a massive amount of time getting everything placed just right (a pain point I’ve felt many times trying to develop on the web with just graphics libraries but no editors). I expect it to help even more when I start layering more artwork into the game!

Then I worked on drag & drop, hand management, getting all the basic mechanics of a card game to work. I wanted to make card movement super juicy! So yes, I got distracted for a while “benchmarking” Hearthstone, Slay The Spire, Monster Train…

Most importantly, this gives me a path forward and motivation to keep building the darn thing. I still can’t wait to get the physical version into everyone’s hands, but this is a perfect challenge in the meantime. It’s already looking promising!