A very atmospheric playtest, and some musical goodies!

I ran another playtest of The Zone last night, staged astonishingly well by my friend nickpunt@, and the amazing jeeyonshin@ live tweeted the entire thing. 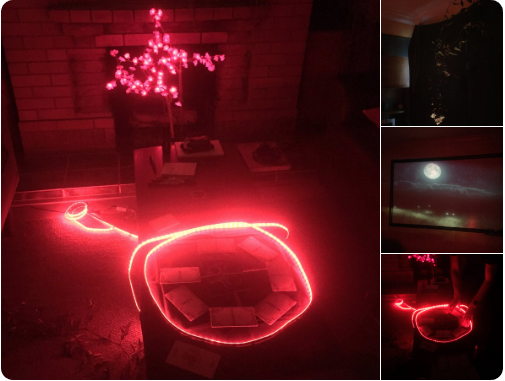 She captured precisely the eerie wonder and horror of the game. Gives me chills!

I’m sitting down to playtest @raphdamico’s #TheZoneRPG with friends and Nick pulled out all the stops as game host: pic.twitter.com/fa93qwWbj3

The third expedition supposedly found a stone — palm sized, unremarkable to look at — that cures anyone who held it of anything that was wrong inside. Of course, no one came back from that expedition or the right that came after it, so it’s just a rumor. pic.twitter.com/Ojbk26P2Uf

The longer we stay the more miracles we see. Light motes hunt in lethal packs. The lapis blue leaves gather together and form a new arm for The Scientist. Trails clear themselves before us. The more miracles we witness, the further I feel from God.#TheZoneRPG

The Soldier rests his hand on the elk’s forehead. The light motes pulse in tandem with his heartbeat. The leaves on the floor swirl. Blood drips up from the creature’s wounds as the Chaplain’s voice resonates through him:

“My child. There is no forgiveness here.”#TheZoneRPG

Looking for the perfect soundtrack to listen to it by? Here’s the atmospheric playlist we played by which I’m just going to now call the official soundtrack of The Zone. It was amazing to experience the synchronicity of our storytelling and the music, each influencing and enhancing the other. (Thanks Nick & Dana for putting it together!)