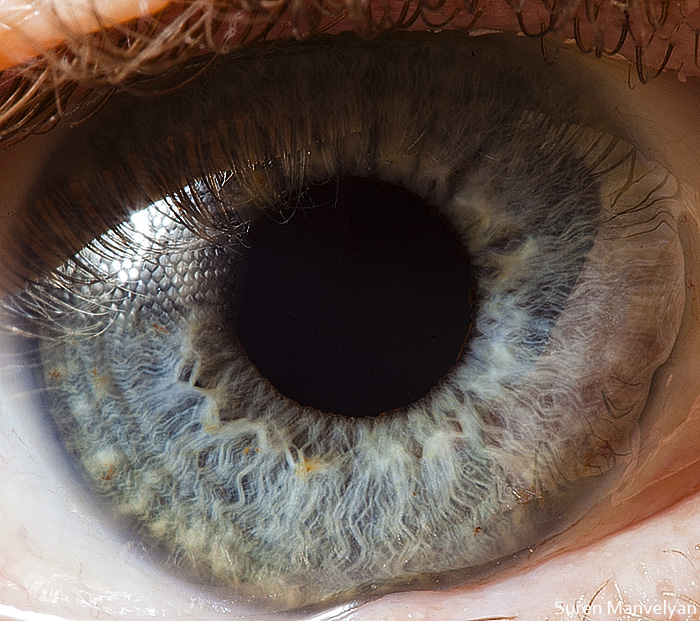 A quick update & weekly brainfart of thought provoking articles, threads, and projects at the intersection of larp, rpg, storygames, social systems, and design. Please tweet me @raphdamico with comments or feedback!

Me, very late to the party: have you seen the App Store reviews for Yo? 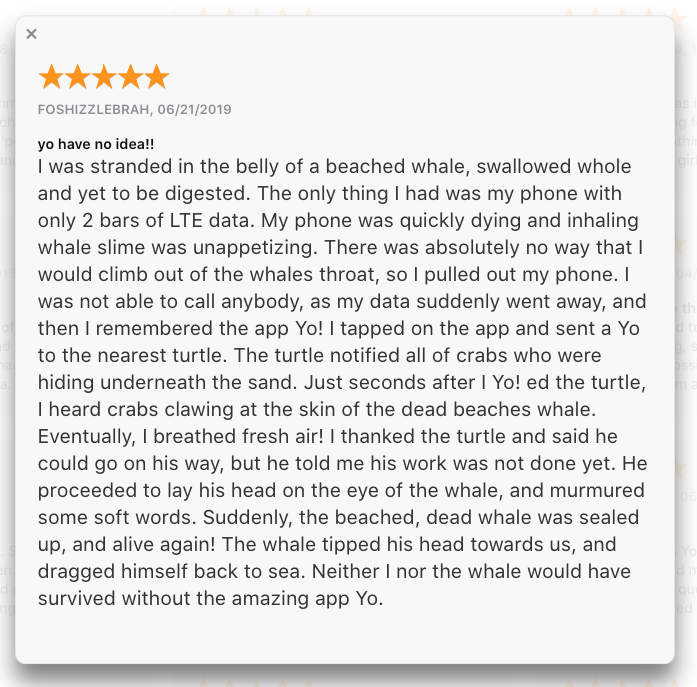 These reviews are an eddy of mindwarping microfiction not seen since the legendary Amazon Banana Slicer. But to me, this is more than just a festival of ironic takedowns. I see something that struck a societal nerve, and I want to revisit the damn thing because at every intersection of ridicule and virality are clues about the human spirit.

So yeah, I’m going to talk about Yo.

Once upon a time, I lived just a hop over a low wall from one of my closest friends. If I sent a Yo and received a Yo back, it was code to hop the wall and hang out. And it worked for the short time we used it. Remembering this made me think: how much time did we spend just feet away from each other, alone?

Yo, completely accidentally, is about love. Specifically, a magical thing our brains do for those we love; when someone has made enough of an impression, our minds spin up a simulation, a tiny homunculus process that runs in the background so those we love are always with us.

You’ve felt it. You were thinking of calling a friend, and they called you. (Back when people still used phones, I guess.) You remembered to send that good luck text just before your spouse’s interview—and felt their anxiety while they were in it. Just now, you heard the voice of an ex-partner in your mind who reminded you to take out the trash. 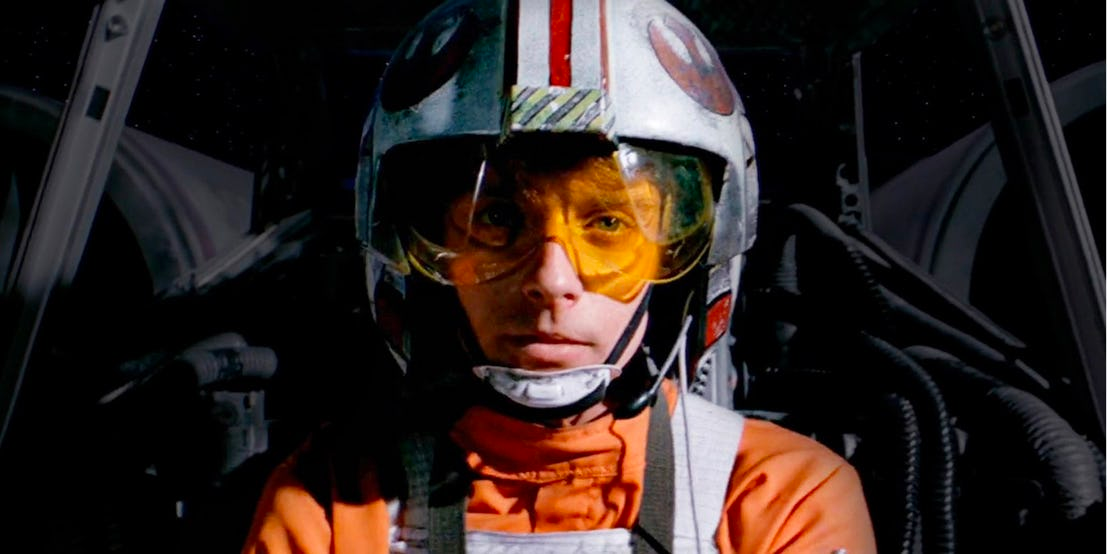 Luke, with a force ghost in his brain. Yeah, it’s kinda like that.

We have what psychologist Kurt Gray calls “the ability to have offline models of people’s minds.” And these are very, very tangible parts of your neuronal matrix. That version of your friend is literally occupying a chunk of your brain, in the form of a particular set of neural pathways. Real tangible, fleshy, stuff.

I love how Douglas Hofstaeder wrote about his wife Carol lives on within him—and even beyond—even after her unexpected death from cancer:

Along with Carol’s desires, hopes, and so on, her own personal sense of “I” is represented in my brain, because I was so close to her, because I empathized so deeply with her, co-felt so many things with her, was so able to see things from inside her point of view when we spoke, whether it was her physical sufferings… or her greatest joys… or her fondest hopes or her reactions to movies or whatever… For brief periods of time in conversations, or even in nonverbal moments of intense feeling, I was Carol, just as, at times, she was Doug…

(So)…The name “Carol” denotes, for me, far more than just a body, which is now gone, but rather a very vast pattern, a style, a set of things including memories, hopes, dreams, beliefs, loves, reactions to music, sense of humor, self-doubt, generosity, compassion, and so on. (via Psychology Today)

With that model of your friend is a model of their schedule, their interests, their whole life. For a particular set of people in your life, you don’t need to spell everything out, as you are bound in a web of shared subtext and context.

That’s where Yo comes in. 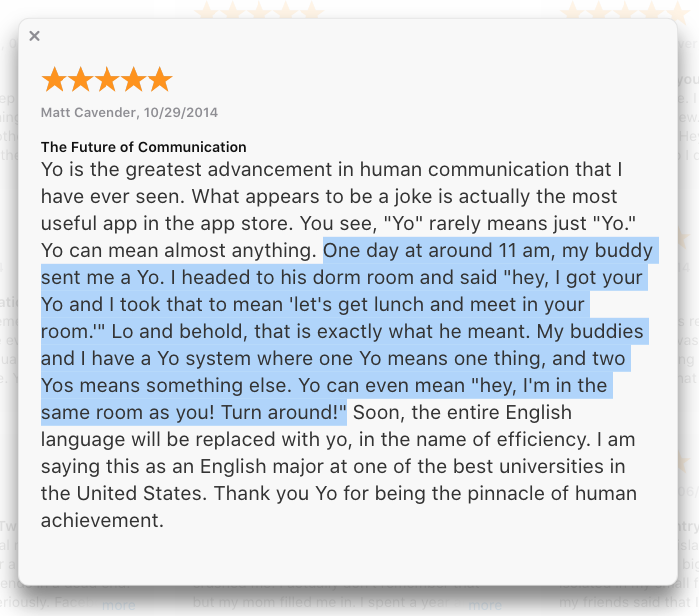 Other times, it’s the context of the world at the moment of the sending, and knowing that this particular context—football—matters to you both: 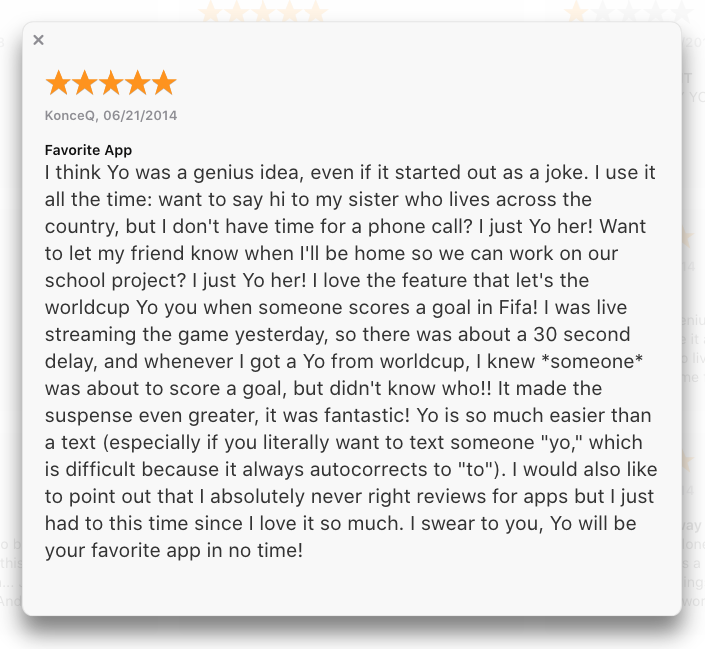 By removing the content, you force the context to do so much more. Forget bubbles with text in them. Yo is the tip of the hat, the meaningful look, the gentle hand on the shoulder. A Yo says only: “I’m attending to you right now.” And into that intention flows meaning.

Zen teacher Deborah Eden Tull says: “Attention is the most subtle form of love.” That’s all a Yo is, really. Just a little bloop of attention.

Yo only works between those who have these shared models of each other in their heads, so of course it’s not a general solution. Far from it. But when it does work, it’s an affirmation of your love for each other. Like an unexpectedly good dance, a shared in-joke, or a “jinx” moment when the never-ending rube goldberg of your two minds accidentally blurt out the exact same word.

It’s affirmation of the magic already going on in your head.

Now, is Yo the right word? Does it speak to everyone? Should it have been Hey!, ❤️, Sup, Heeeeeeeeey, !, ?, or any number of things? I don’t think so. Yo perhaps has a bit too much of the cap backwards bro. Does the archetypal Yo wear a tank top? Is it holding a Red solo cup full of weak beer and ping pong balls?

Is Yo crushing it?

Perhaps, but it’s so ridiculous, such a “Fonz” like caricature, that it can be reclaimed from its frathouse roots. A Yo has undeniable warmth. If it were more neutral, perhaps it wouldn’t work.

And why does it need to be a separate app, anyway? Can’t I just text you a little bubble with the two magical letters, “Yo”?

Well, here’s the crux of it. The medium is the message. A text means an unlimited world of potential responses. I have no guarantee that you will “Yo” back. Instead of giving you a narrow choice, I’ve given you infinite possibility to think about. The limited functionality of a Yo is precisely the point.

It’s a glance, not a word. It’s body language.

Staying within Yo means lower friction—which also means you’re more likely to send one. You opened the app, saw who was around, tapped once. That’s it. All it tells me is that you performed a ritual look at a list of people you care about. If I told you I could make a technology that could make people mindfully look at their friends and express a burst of attention towards them, wouldn’t you love that?

Attention is the most subtle form of love.

By making the digital communication as small as it can be, Yo also puts the phone in its place. It says, gently: “Tap your friend on the shoulder, then go talk to them for real”. The immediacy and power of texting, the ability to think asynchronously and compose the perfect thing, makes it tempting to never use any other communication channel. We didn’t grow afraid of phone calls for no reason. We’re afraid of phone calls because the texting alternative exists.

As a designer and economist I know that the tools you make available incentivize behavior. Would our connection to each other be deeper if instead of endless texting while half-watching Netflix we could only “Yo” at each other? If all our devices supported was keeping our internal homunculi of each other alive, and then made us call each other or meet up?

Is the single bit Yo a more respectful version of the role digital communication should play in our lives?

It’s a ridiculous question. But that’s exactly why it’s worth asking.

Now, I’ve intentionally left out so much context, including the fact that Yo itself has added a few more features. But let’s callously ignore that.

I wanted to talk about the Yo debacle because this beautiful pop culture moment of collision between accidental art and venture capital forces us to think about what “connection” means.

I called this a eulogy because Yo, in silicon valley terms, was not a “success”. But it reminds us of how valuable it is to make experiences just to poke and prod at behavior.

The collisions of ridicule and virality is like that of two protons smashed together in an accelerator, and the trails in the bubble chamber are our insight into what this means for the laws of human communication. 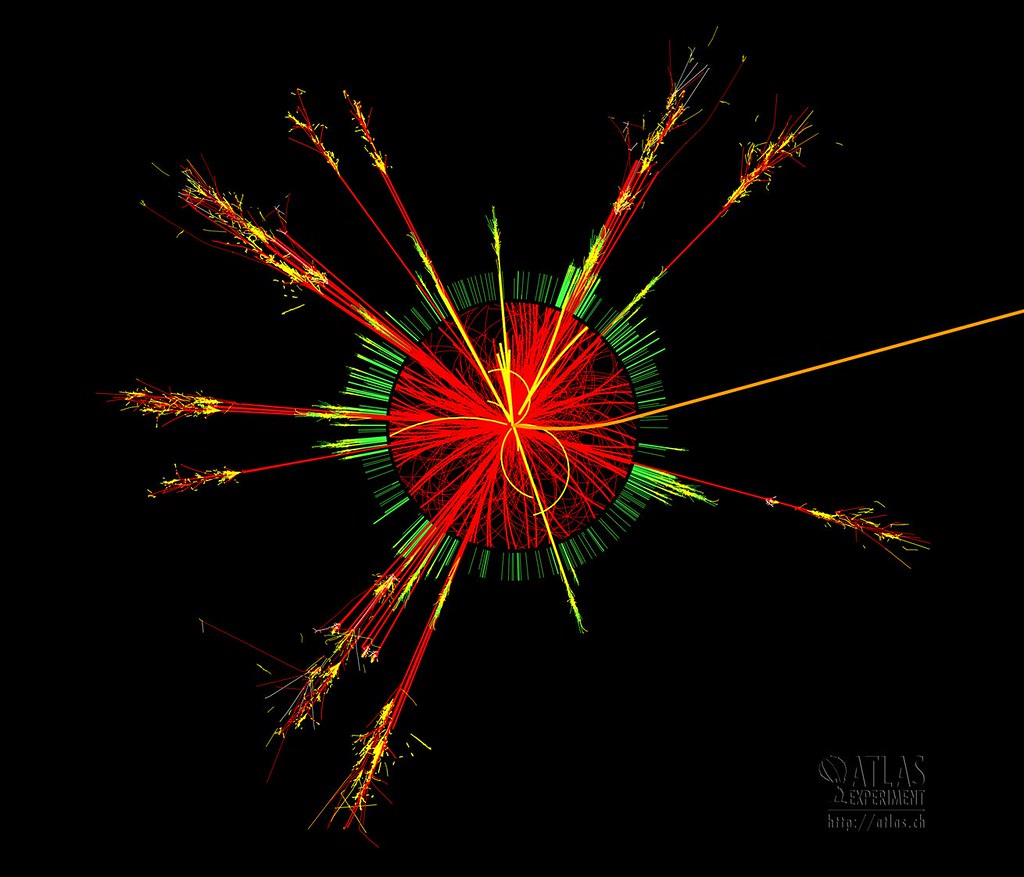 A simulated ATLAS collision event in which a microscopic-black-hole was produced in the collision of two protons. (Via CERN)

Waaaaay back in the primordial soup of 2004, designer/artist Matt Webb created a Mac app that put a little eye in your taskbar. 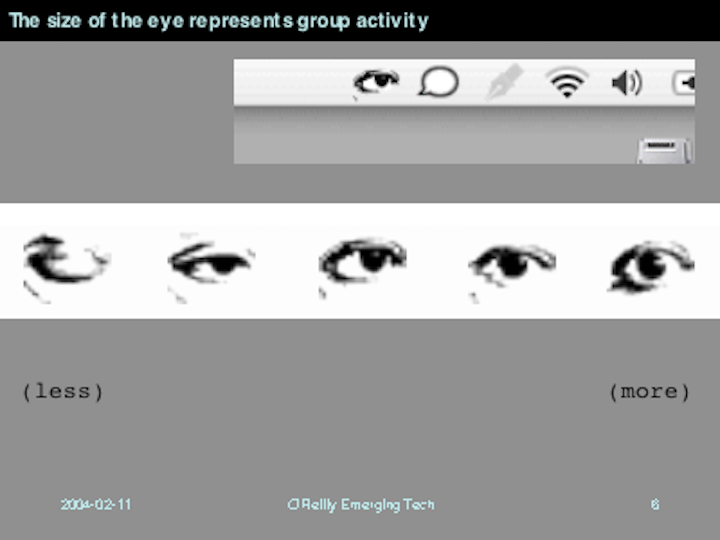 Behind that eye is your chat client. Every time you check your chats, the eye opens for a little while, then slowly closes.

If someone else checks their chats right then, they’ll see a new option “Glance”. 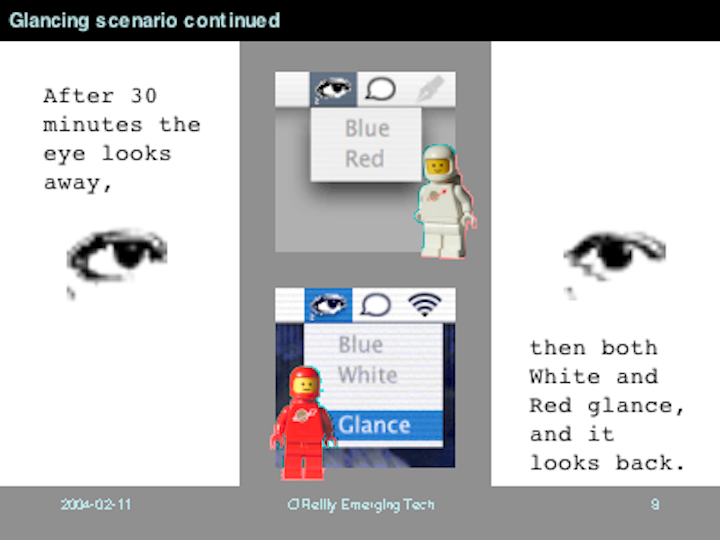 If lots of people are glancing, the option is “Chat”, which opens a group chat with everyone. 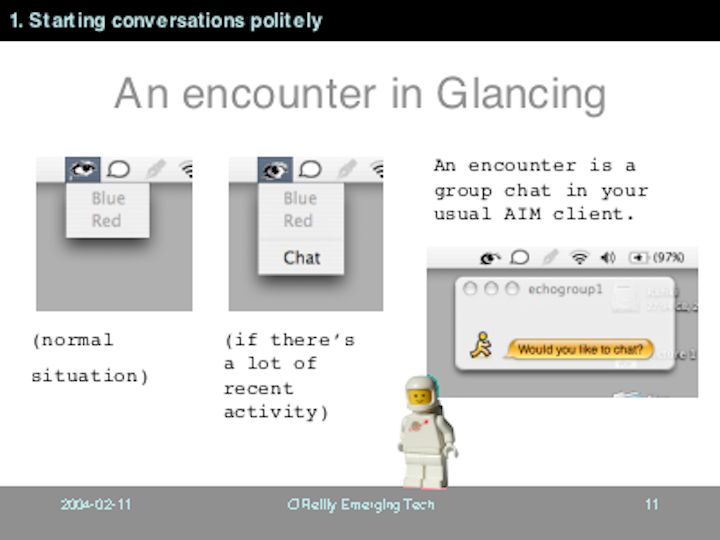 The model for Glancing is people sitting at work, focused on their own stuff. Every so often, somebody looks up to rest their eyes or because they’re thinking, maybe actually to look at someone else. Maybe they catch someone’s eye and that person nods back. And then they all get on with their work. If there’s more of that kind of eye contact going on, the eye is more open (or obvious). If there’s less, it’s smaller.

You should check out the whole deck, still up on Matt’s site.

I often come back to Glancing because it’s an example of a deeply thoughtful effort to translate a small and subtle signal into the digital. Unlike Yo, it’s an earnest attempt, and as you’ll see in Matt’s deck, based in both deep observation of human behavior and study of the science.

The takeaway for me is that there is huge possibility (and fun) in zooming deeply into tiny elements of the human experience, and seeing what happens when we push them.

How small a piece of body language can we transform into a whole experience?

What meaning do players invest in it, when this behavior is isolated, put out into its own grand, empty mechanical space?

What happens when you remove most of what’s expected?

This post is really an invitation to go explore.

Go ahead and remove 99% of the functionality that people thought was necessary!

Go create things that only work in a narrow set of ludicrous contexts!

Go create things that make people uncomfortable, that force them to dance about architecture. 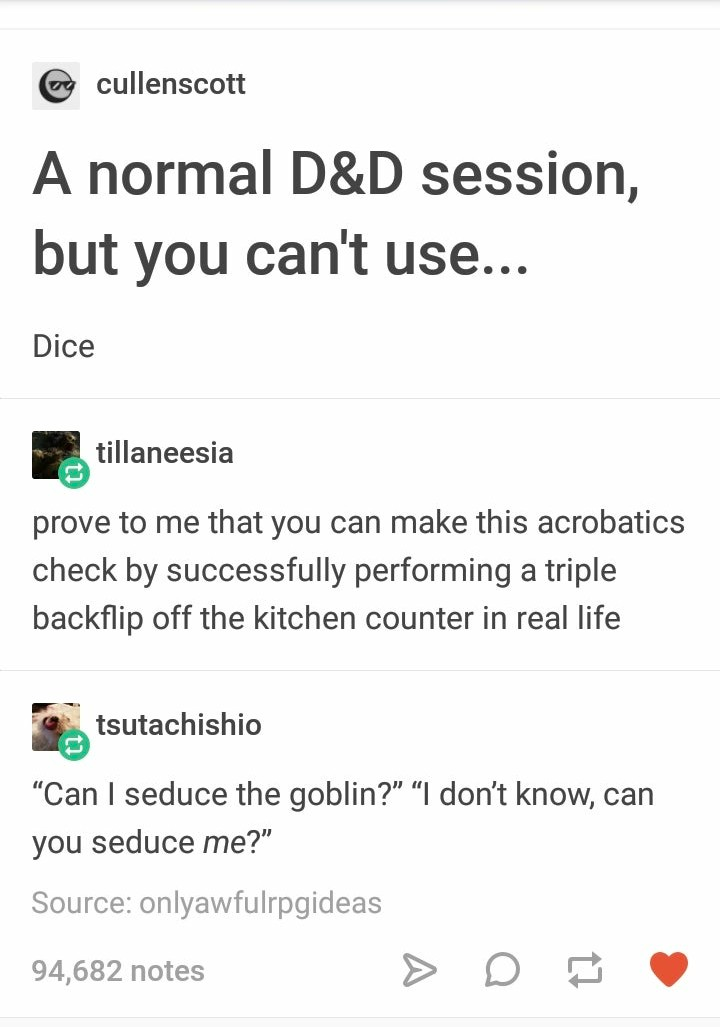 But seriously, go make something ridiculous.

I hope we all one day make at least one thing that has an App Store reviews page full of ironic microfiction. Do that, and we’ll know we made something that made the human superorganism twitch.

And that, I think, is more than enough.

You've reached the end, my friend. Sign up to get the next one right in your inbox; it goes out every week or so 💌